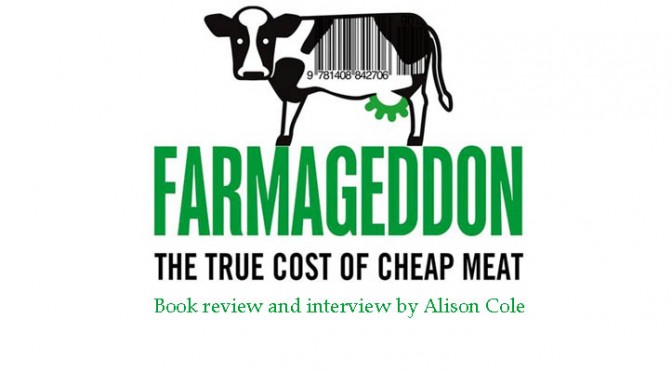 Review by Alison Cole, used with the generous permission of Animal Voices Vancouver.

It’s time to wake up and dramatically evolve our consciousness when it comes to making choices about our food.

So goes the underlying message of Philip Lymbery’s new book “Farmageddon: The True Cost of Cheap Meat”, which takes us on his journey of traveling the world to observe and investigate global industrial farming systems. Through his analysis, he provides the reader with fascinating and alarming discoveries that reveal the facts involved when it comes to the production of our meat on a mass scale. The bottom line is the “bottom line”, where the priority for such food industry is money, with little to no attention given to animal welfare, environmental impacts, and the overall health and well-being of humankind.

As the CEO of the animal welfare organization Compassion in World Farming, with a vested interest in our food supply, Lymbery’s investigative efforts run strong in his search for the truth in various facets of the cyclopean picture. For example, he travels to Peru where he observes the effects of the decimated fish supply as a result of overfishing. One of Peru’s leading businesses is exporting ground-up fish to China and Europe to be fed to farmed animals, and he observes the now uninhabited ‘guano’ islands that were once abundant with birds. He learns that all birdlife has been demolished as a result taking all their fish to be made into fishmeal. He calls the fishmeal industry an “environmental catastrophe” and one of the filthiest secrets of the factory farming industry.

In addition to such ecological disasters, Lymbery gives us a glimpse into the world of the corrupt slaughterhouse system, in which the veterinarians employed by these establishments are forced either to play by the organization’s dirty rules or not at all. He tells us of a personal account relayed to him in which a slaughterhouse vet was threatened at knifepoint for stopping the slaughter line because he saw an issue that threatened the safety of the meat. Such a drastic action as ceasing the production line means less productivity which means less money for all involved, and is a deed that is rarely executed despite any frequency of need for it.

Where is the enforcement, then, for keeping the meat safe and for the welfare of the animals in such an aggressive environment where kill quotas by the hour must be met, lest the workers be docked pay and otherwise punished? These kinds of conditions in the abattoirs are, unfortunately, all too common, with little hope for improvement as the current system runs.

With “cheap” meat also comes the grandiose use of antibiotics in our food system, which is just one more prong of many that make up the faults in this global industry. It’s a fact that half the world’s antibiotics are used to feed farmed animals, whereas closer to 80 percent of North America’s antibiotics are. And these drugs are routinely fed to even the “healthy” animals in the factory farming systems, as a preventative measure to illnesses in the animals that are often inevitable with the systems of mass confinement (aka factory farming).

As more antibiotics are fed to the animals that we humans then eat, we are approaching a crisis in which this medication will be coming less and less effective to use for human illnesses when we need them! The audacious cycle affects us all on this planet – a fact that must be understood and addressed by us, the consumers and inhabitants of this planet.

So how does this all end? Given the many angles of this story as told in this 426 page tome alone, the effects of the meat industry on this earth are multi-fold and complex when you peel back the various layers wrapped around the core of the money, the factory farming system, and the peoples’ avid hunger for animal flesh. But that really is the core, and when contemplated at its foundation, I believe that we can empower ourselves to change the system, and at least become consciously aware of this system that manifests so much destruction in our world.

“Farmageddon: The True Cost of Cheap Meat” will open your eyes to the hidden processes of industrialized food production. It will have you question how “cheap” that meat really is the next time you think of buying a hamburger, an action that once seemed so simple and insipid. Consider what lies beyond the shiny packaging in the supermarket when you purchase your meat products. And take one step further in truly educating yourself about the looming “Farmageddon” and taking personal actions to help reverse the disaster.

You can start now! The first 48 pages of the book are available to read here online for free.

And here’s an audio interview that I did with Philip Lymbery on the Animal Voices Vancouver radio show on various topics covered in the book: