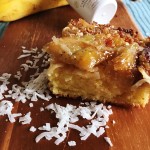 Note: You can add more rum if you desire as the coconut rum is not as strong as the dark rum.