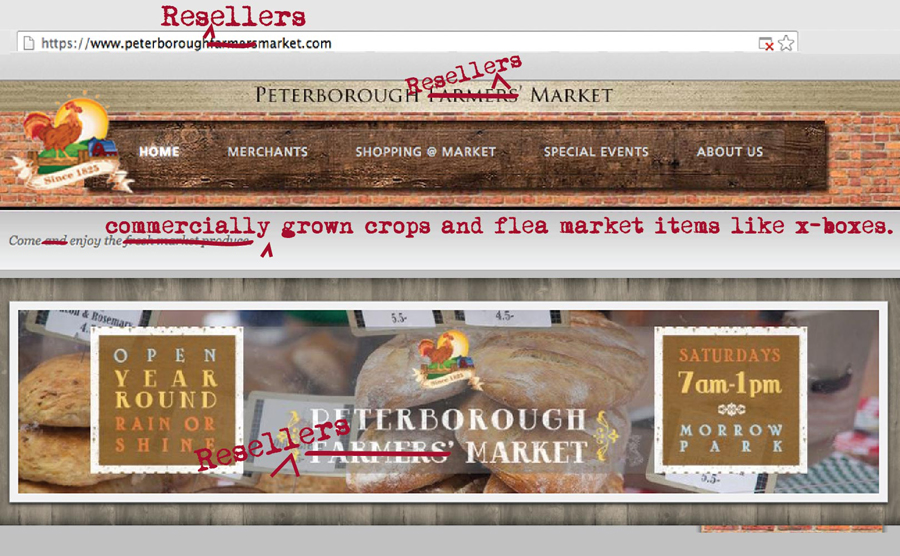 @PTBO_SatMarket an ersatz (the polite term for fake) “farmer’s market” in Peterborough, On, recently featured in a @cbcmarketplace expose for falsely marketing commercial produce as locally farm grown. Rather than fix this, they’re threatening seven local farmers & artisanal producers with expulsion from the market, as of January 8, 2018.

One would think that the market would be aghast at the duplicity of the reselling vendors, but in fact, this practice is not only supported, but considered desirable. The goal is to present the market as fully stocked with farm produce even when most local farms would have little or no product left.

The market owners are using a tautological argument to obscure the general understanding of what a traditional farmer’s market represents. “All vegetables are grown in farms” “All produce is farmed”. Effectively, that argument leads to the assertion that any supermarket is also a farmer’s market.

This is an appalling practice. Farmer’s markets are a vital link to more than merely food. Seeing the ebb and flow of produce, becoming accustomed to natural availability, puts us closer to an understanding of how the world creates our sustenance.

Obviously, the consumers are also being taken advantage of.

Worse still, the fake farmers sell their produce for the same price as that available from local farmers, with none of the overhead or risk…effectively stealing from the pockets of both vendors and consumers. Literally stealing the reputation and ineffable contribution of farmers and wearing it like a sheepskin on a wolf.

The market’s board of directors are having a special meeting on Jan. 8 to vote on whether to dismiss Circle Organic, Otonabee Apiary, Necessitea Elixir, Chef Marshall, Finest Gourmet Fudge,
Ashburnham Farm Gaelic Garlic, and McLean Berry Farm, all selling items either grown, or made by them, locally.

*Update* This CBC article, published on May 5, 2018, details advances in the Peterborough Resellers Market case:

…With spring taking grip across Canada, farmers markets are returning to public spaces. But five agricultural producers have been kicked out of one of Ontario’s largest markets after speaking out about other vendors masquerading as growers of all the produce they sell.

Meanwhile, there is no indication that vendors who were exposed as misleading consumers faced any sanctions. They told CBC News that they will be returning to the market this season… (more)

To read more on this topic, click on this link for the Peterborough Examiner, which links to other articles by the paper on this issue.

Also this article from Kawartha Now
and Peterborough Farmers’ Market head was guilty of fraud
and Farmers’ network wants to take over troubled Peterborough Saturday market
To sign the online petition #NoPinkSlips, go to www.change.org/p/nopinkslips-stop-farmers-from-being-kicked-out-of-the-ptbo-saturday-farmers-market.