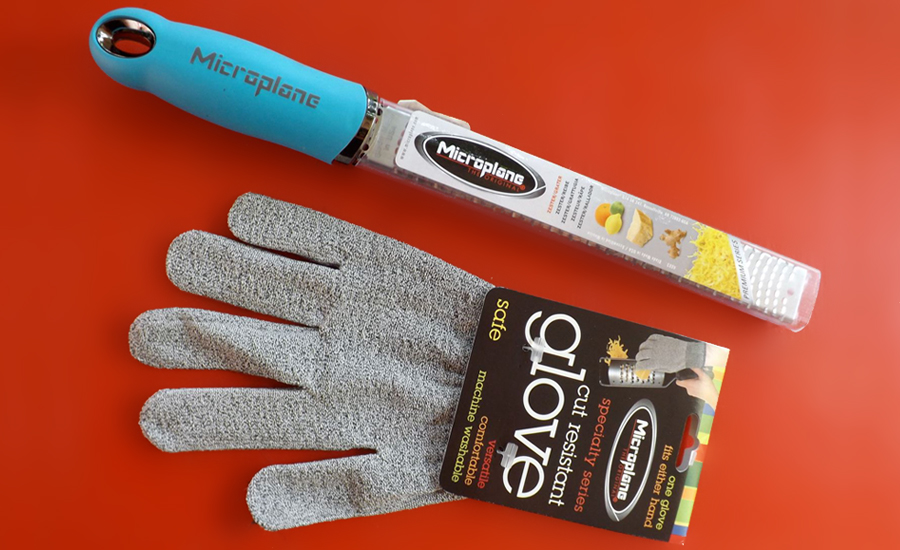 “It’s a poor carpenter that blames his tools, but nevertheless, bad tools suck.”
Me (Quote that as much as you want to. :-))

Article and photographs by Gayle Hurmuses,

A well designed tool does its job with style and grace, assisting in the task in ways that transcend the obvious: A blade that begins and remains sharp, a grip that reduces fatigue and helps transfer force to a blade, a sheath that protects.

A thoughtfully designed tool makes work easier and often safer. The Microplane graters do an excellent job of the former, and the glove does the latter beautifully. Use the gloves properly, and you will never have a shredded knuckle again.

These things are freaking awesome. First, Nancy Whitmore, their charming PR rep, sent the long, slim citrus grater and the glove. I immediately  put them both to the test, grating frozen Parmesan and taking it to the tiniest piece I could hold, blithely careless of my fingers.

The grater did a beautiful job of grating frozen Parmesan rinds, which was the toughest test I could dream up. It did a masterfully impressive job, shredding the cheese into fluff. I remain in awe, especially considering that I’ve never owned a food processor that could handle even fresh Parmesan rind, let alone frozen…and this is just a handheld manual grater. Bonus, it comes with a plastic cover that will prevent any accidental finger shredding while rummaging through drawers.

The glove was great, protecting my fingers from harm. It is  made to be cut resistant and and as such,  does its job excellently. It’s not impossible to damage the glove however, so you should still be watching your hands to make sure it isn’t in the danger zone.

Since then, Nancy has sent me a couple of their ‘Elite Series’ graters, the covers of which also serve as a bowl and measuring cup for the grater when you reverse them and attach them to the blade in the opposite direction. Quite a clever design.

I’ve used the larger gauge grater to demolish a potato for latkes, a task it accomplished with velocity, and the smaller gauge again for the frozen Parmesan rind test, and it was like grating mild cheddar, easy, quick and really felt like nothing at all.

On Monday, they’re going to demo this year’s new products…and I can’t wait to see them!