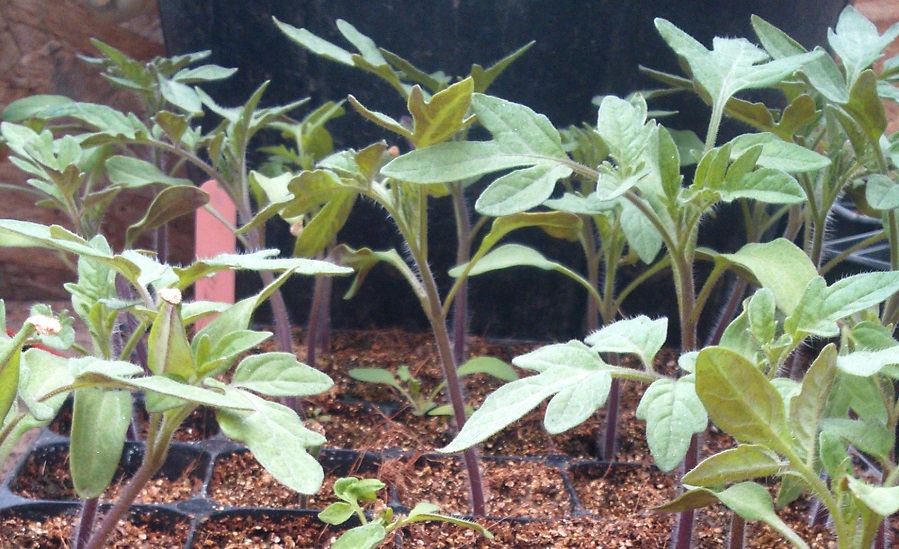 Article and photograph by Jacqui Shannon, expat Canadian in the UK.

A month ago myself and several volunteers helped plant hundreds of Tumbling Tom and Golden Queen tomato seeds at Organic Lea. They will be both for the summer production on site and for the annual plant sales. For anyone who has ever eaten a perfectly ripe home grown tomato, it will come as no surprise that tomatoes are by far the most popular plants for home gardens in the UK. These seedlings have a slightly blueish tinge, indicating that they’ve begun to lack nutrient.

The month old seedlings have really thrived in the three week warm spell we’ve been having and it was evident by the blueish tinge on their leaves that the nutrient in the seed compost was exhausted. It’s too early to put them in the ground, so potting on, into more nutrient rich potting compost was the only option. In order to avoid “leggy plants” each seedling is planted into the soil up to the first pair of leaves.

There’s really no excuse not to grow at least one tomato plant. Perhaps more than any other, tomatoes have a wealth of varieties to suit your available space, even a height restricted roof garden like mine has more than one option.

For three years now, I’ve planted heritage dwarf variety Tiny Tim (which grows to 30cm) and had exceptional results. They’ve got some lovely attributes aside from their stature. Firstly, for a tomato they’re remarkably un- fussy. These hardy plants do well in both sun and shade which works well since I am on the move. Secondly, despite their small size they really pack a huge sweet tomato flavour punch, meaning four or five picked and thrown into any dish makes an impact.

This year, just to try something different I’m planting Tumbling Toms from the plant sales.

Regardless of which variety you choose, your plant’s fruit will have flavours that far surpass their store bought brethren. With tomatoes we’re spoilt for choice and justly rewarded.